Skip to content
50% Off Select Premium ShowsUsing the Code PROUD50 at Checkout. Jan & Feb only

Anyone who hasn't been spending their life living under a rock has heard all about this special city. It's fast-paced. Diverse. Creative. Ambitious. But one thing about this place? If you can't keep up, it'll chew you up and spit you out.

With an intense aura akin to New York City, London is certainly not a town for the faint hearted (or the slow walkers). It's a city for big-dreamers, go-getting entrepreneurs, theatre junkies, eclectic epicures, art-lovers, music maniacs and fashion forward folks. In other words - if you can make it London - you can make it anywhere. Year after year, civilians in their millions flock to our nation's capital to soak up the cracking cuisine, culture, rich history, and everything else it has to offer. And in its true London fashion, it shows no signs of slowing down.

As it goes, London is as rich in history as it is a popular tourist destination. Fun fact: London was originally named Londinium back when the Romans invaded in 43 AD! Another fun fact: London was the first city to have underground trains, with the first Central Line tube opening back in 1863! But enough of the fun facts. What we're trying to say is: London sets trends - and the rest of the world follows.

And the capital of our little island continues to dominate worldwide. It's one of the world capitals for fashion, finance, music and film, for example. Not only that, it's the beating heart for all things theatre.

From the most successful musicals at the mighty West End, to smaller-scale dramas, to avant-garde experimental shows, London's theatre scene is well rounded to say the least. Whoever said New York City was the world's art capital has clearly never been to a London theatre.

We know London is the epicentre for theatre. But it's also the place for the most interesting, outrageous and hilarious type of theatre. What are we on about? We're talking about cabaret! If you're reading this, it is very likely that you're not only aware of cabaret, but you're (smartly) a huge fan of the delicious art form. That makes two of us! But for all you cabaret novices, a cabaret is a type of theatrical entertainment bursting with music, song, dance, drama and comedy. And those familiar with the art form already know this undeniable fact. If you're fancying a night at the cabaret, London is the place to be. 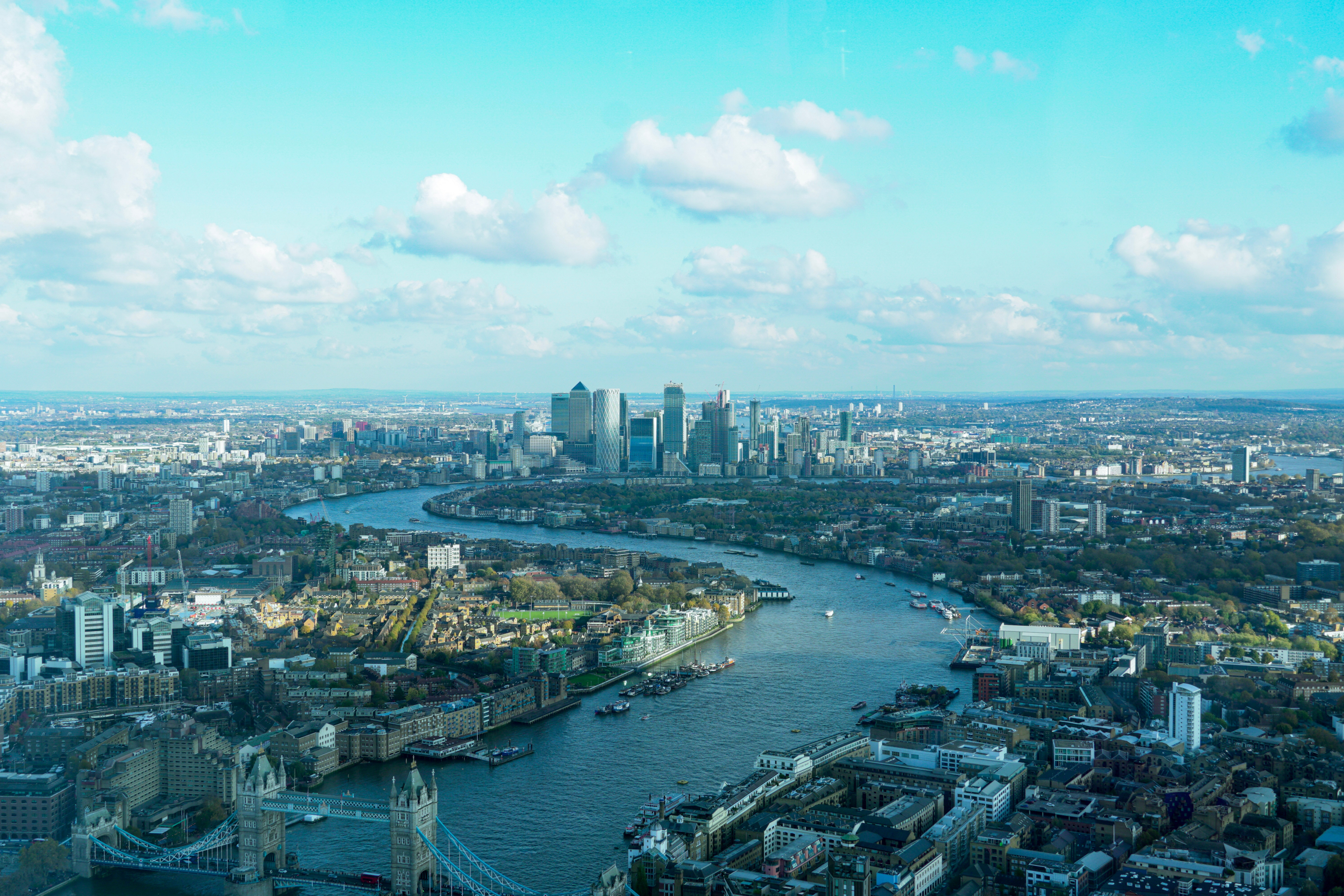 "But why?" you ask? Because London is where we are. "Who are you?" We are Proud Group - that's who. We're the trailblazers of all things cabaret in the UK. And if you happen to not recognise our name, we're going to clue you in. 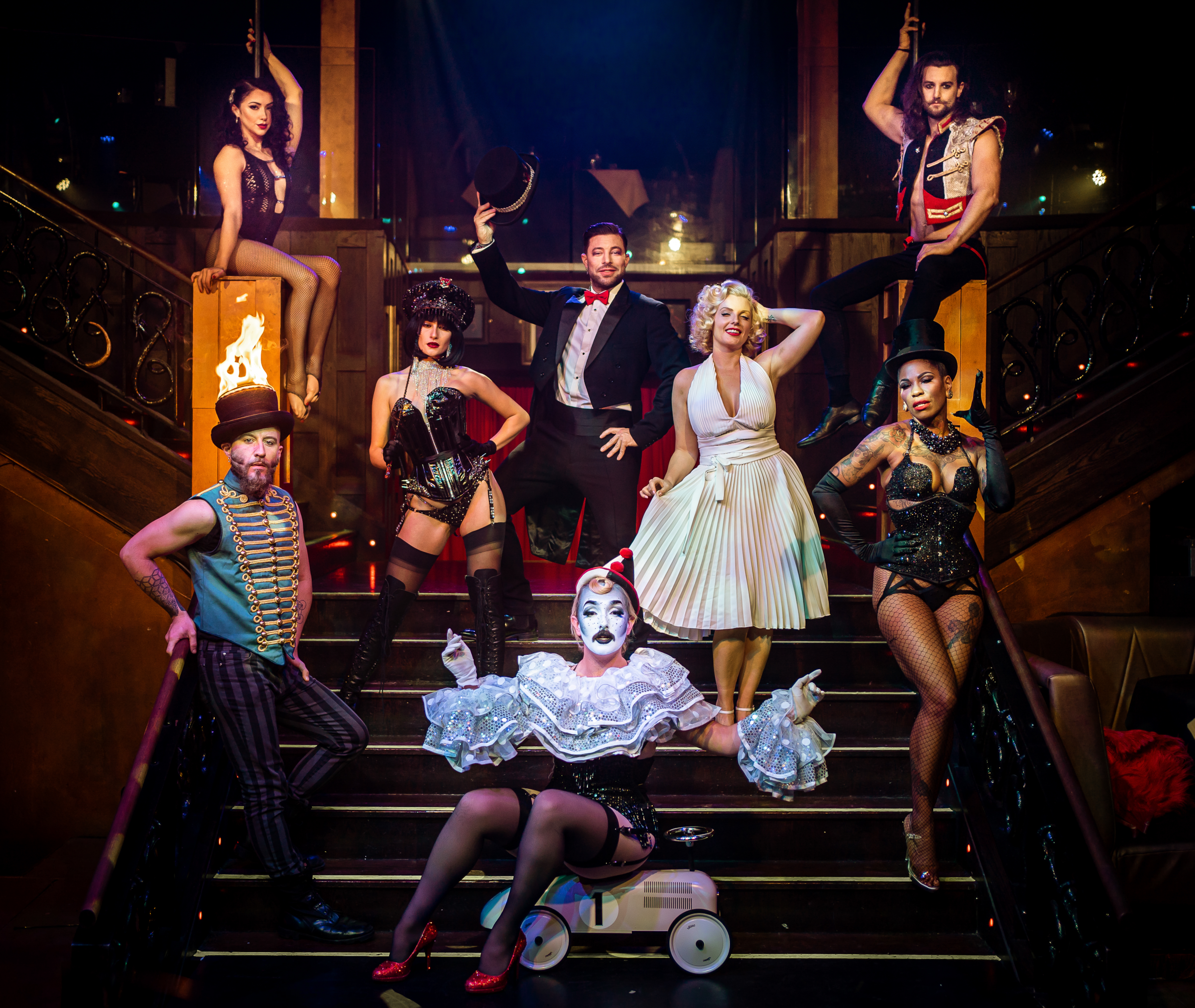 For almost two decades, we've been revitalizing Britain's nightlife scene with our other-worldly cabaret experiences, reviving the timeless art form and getting Londoners as excited about cabarets as we are.

We push the boundaries of theatre, reinventing what an amazing cabaret means. And now we're here to point you in the right direction as to where to watch a London cabaret. Let us show you that when it comes to cabaret in London - you go Proud or you go home.

Fancy copping some cabaret tickets for your next night out in London town? Proud's got you taken care of. All you need to do? Check your schedule, call your friends and grab some of our cabaret tickets before the rest of London beats you to it! 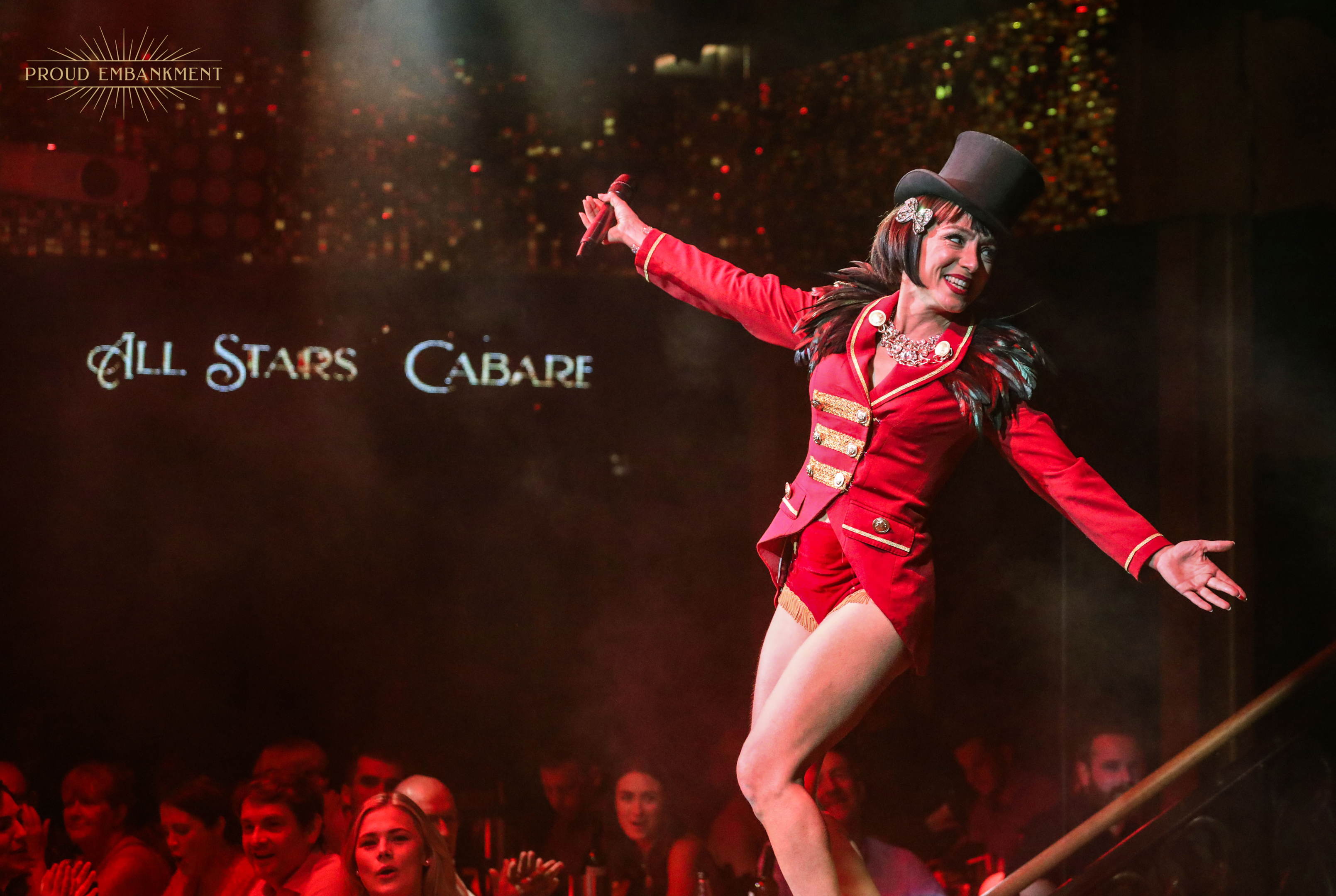 When British entrepreneur Alex Proud opened his first cabaret venue in Camden, he had a vision

The vision? To revive the art form, make cabaret accessible for the masses, and offer mightily enjoyable entertainment that stands head and shoulders above a sea of nightlife competitors. Fast-forward to today. And not only have we met this goal, we've done a running jump and summersaulted over it. "How?" you ask? Let us paint you a word picture. 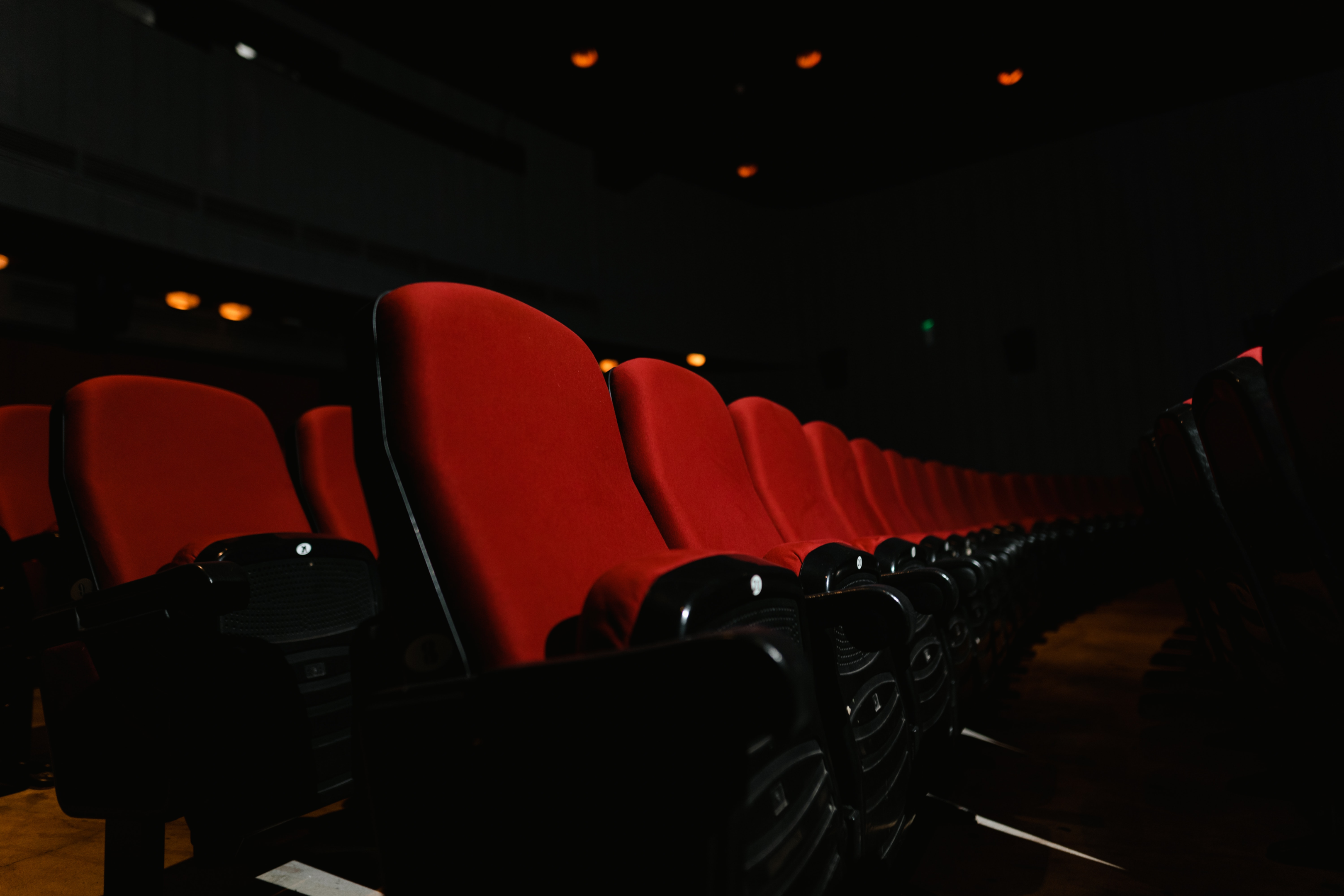 First things first. If a cabaret was a house, the show's respective venue makes the foundations. And we all know what happens to a house with faulty foundations... Like the stellar production design you see in hit movies, a great cabaret venue sets the scene.

It distracts you from the outside world (like a good cabaret should), takes you out your head (in the best possible way) and helps you get completely immersed in the story at hand. The venue brings the story to life. And we at Proud are masters at this. 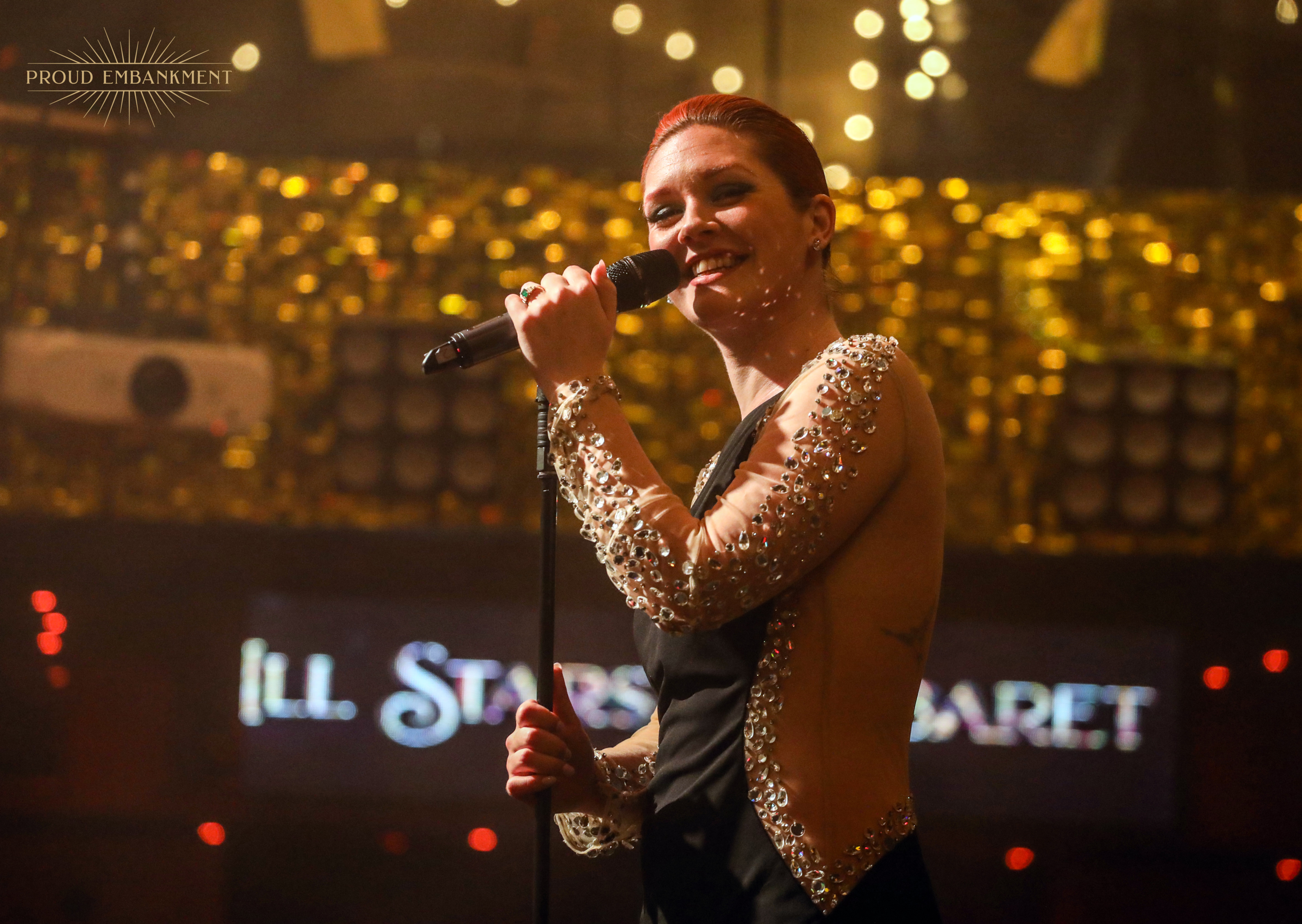 Our grand flagship venue sits smack bang in the middle of the world-famous Victoria Embankment, and boy, is it spectacular. The newly-renovated venue is complete with plush gold and black interiors, ambient mood lighting, state-of-the-art sound and lighting technology and a splash of quirky gold deco. If cabaret is your thing (which it should be, as you're here reading this) just know that we've got all the ingredients to prove we're London's hottest ticket for theatrical cabaret experiences. 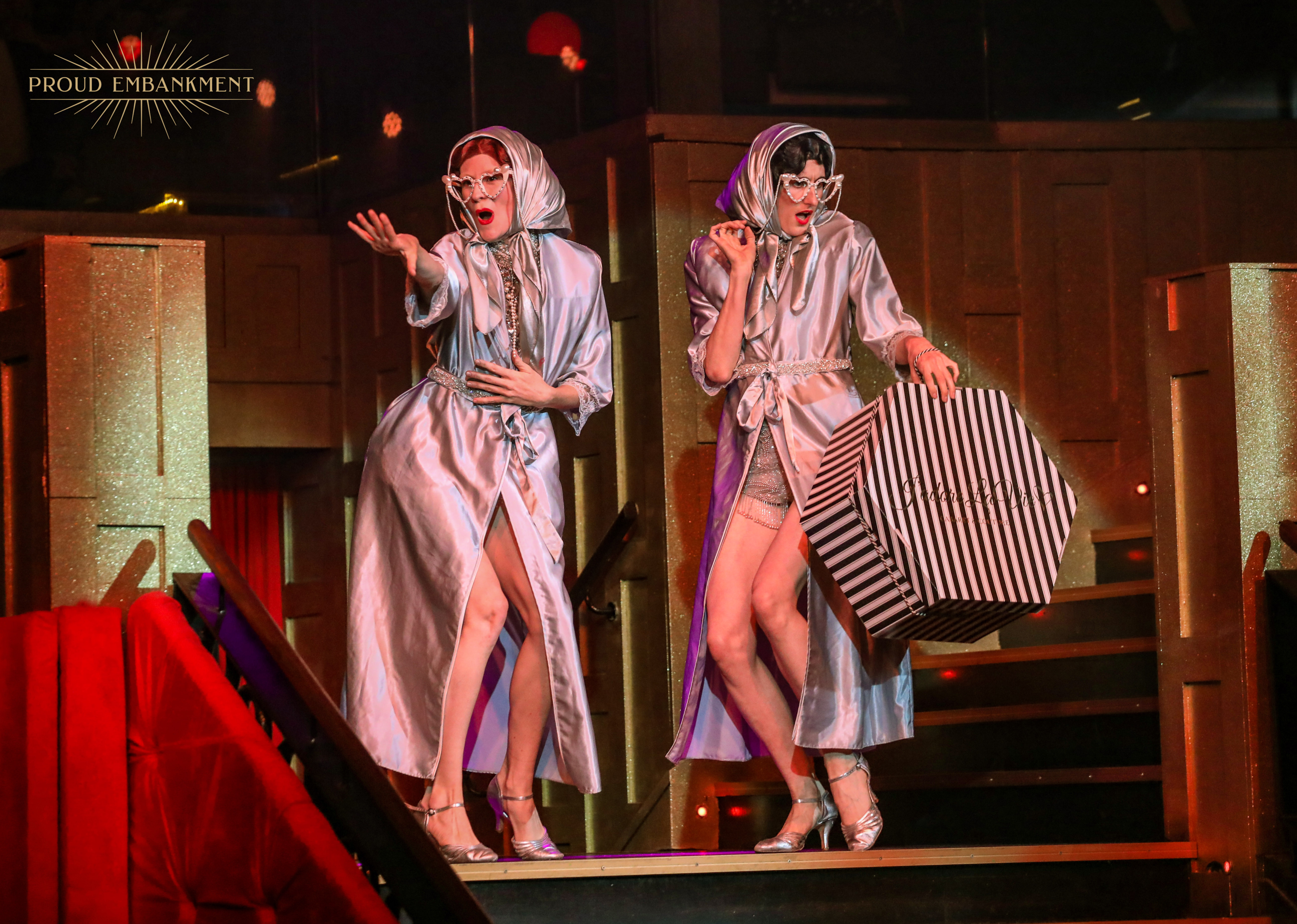 No Matter The story, Our Embankment Venue is the Perfect Canvas for a Cabaret

Over the years, our stunning Embankment venue has served as the sumptuous backdrop to a diverse array of spectacular shows. From celebrating the wonders of Indian culture with Mumbai Masala, to our West End musical revival of Steven Spielberg's smash hit West Side Cabaret Story, we seamlessly shapeshift between theme, story and genre to deliver captivating vaudeville theatre that's so good you'll want to shout from the rooftops about it. Sometimes they're romantic, other times they're funny - but one thing about Proud? It's always a hell of a show. 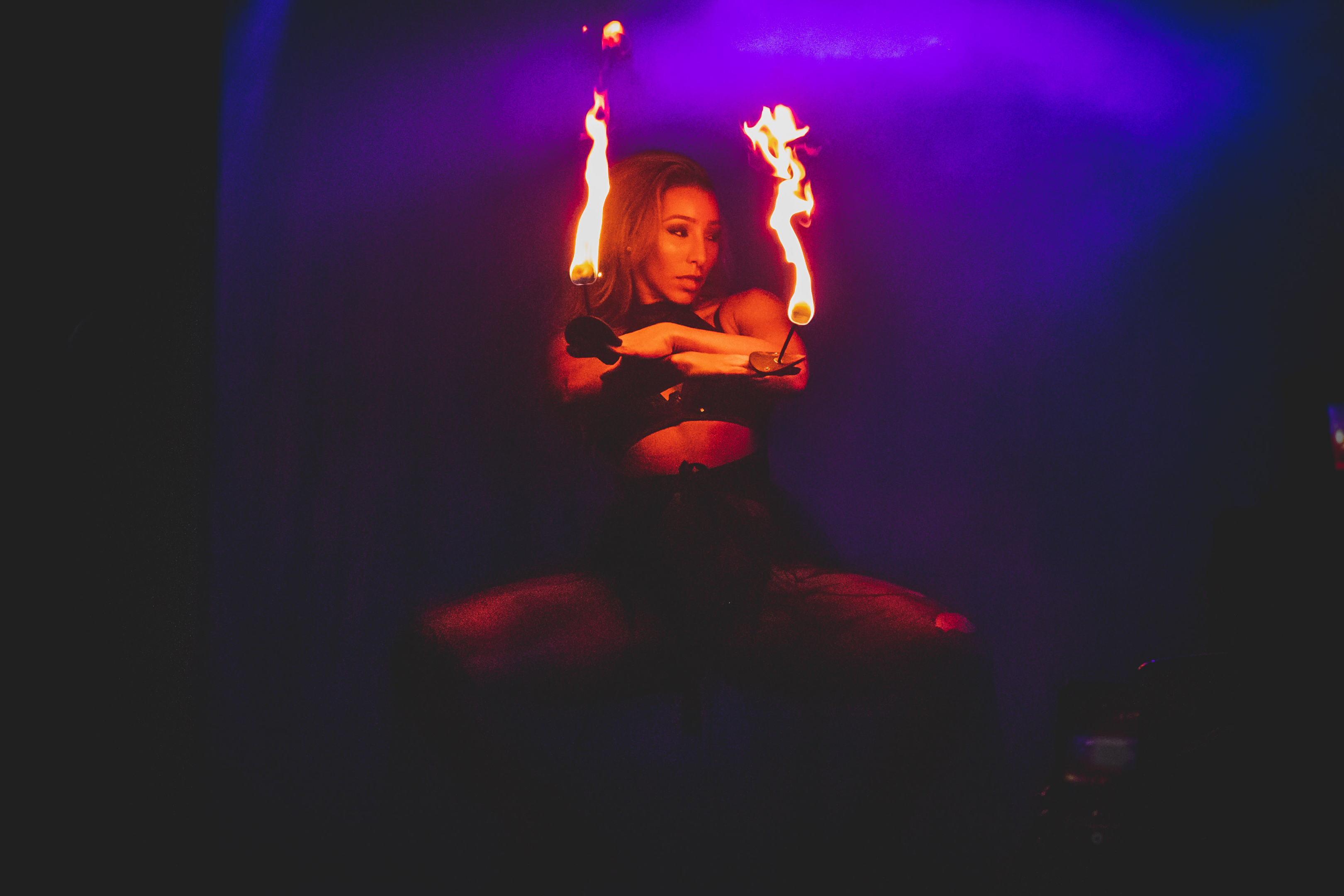 No matter the cabaret vessel, we give our guests a bewitching and dramatic cabaret experience that puts other joints like the The Kit Kat club at The Playhouse theatre to utter shame. But don't just take out word for it. Come on down to Embankment and see for yourself! Before you know it, you'll be calling your friends practically begging them to come and witness the cabaret magic for themselves. 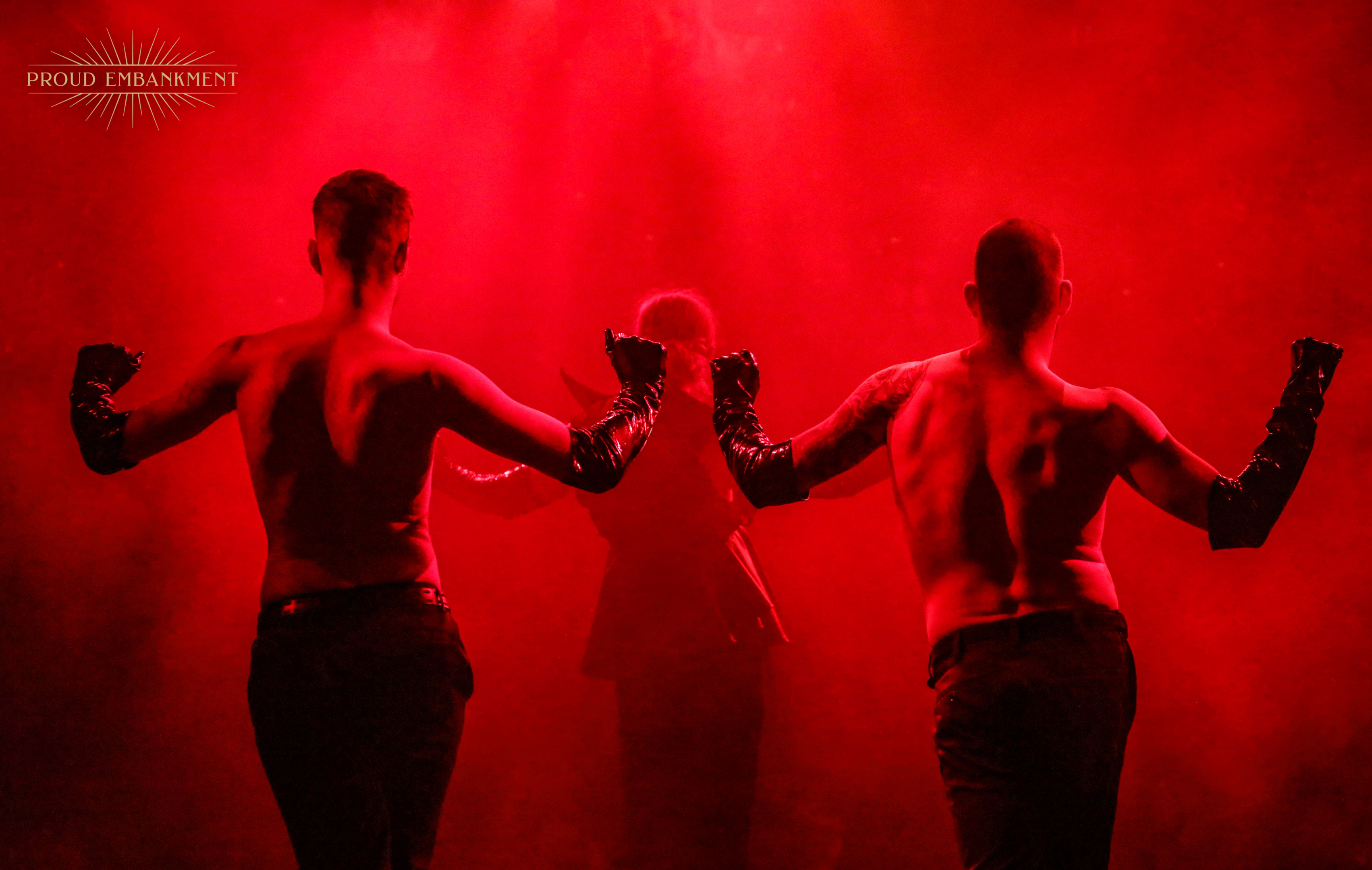 Speaking of magic, we're cooking up some really awesome shows in our cabaret cauldron.

Because we're feeling generous, we'll give you a little taster. We've been making some serious waves on the West End for being the best musical revival of Steven Spielberg's seminal classic, West Side Story. The cabaret show that's been met with a mass of critical acclaim. And now we're about to kick it up a notch with our upcoming Dirty Dancer cabaret. 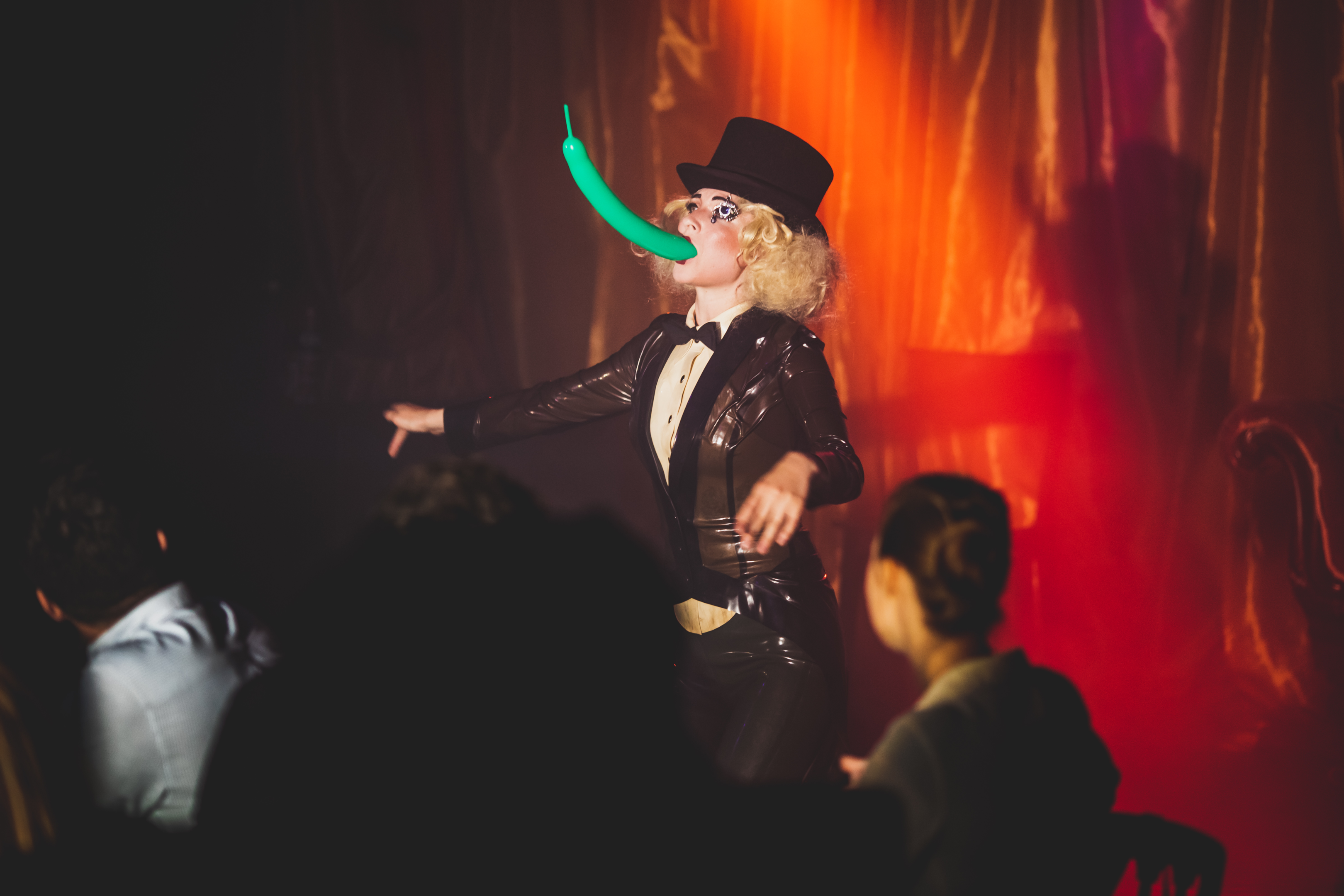 Most everybody has seen (or at least heard of) Emile Ardolino's 1987 classic musical, Dirty Dancing, the smash movie telling the forbidden love story of Baby and Johnny during a summer at the Catskills. But no-one has seen a take on Dirty Dancing quite like ours. What sets Proud above everyone else's take on the film version, you ask? 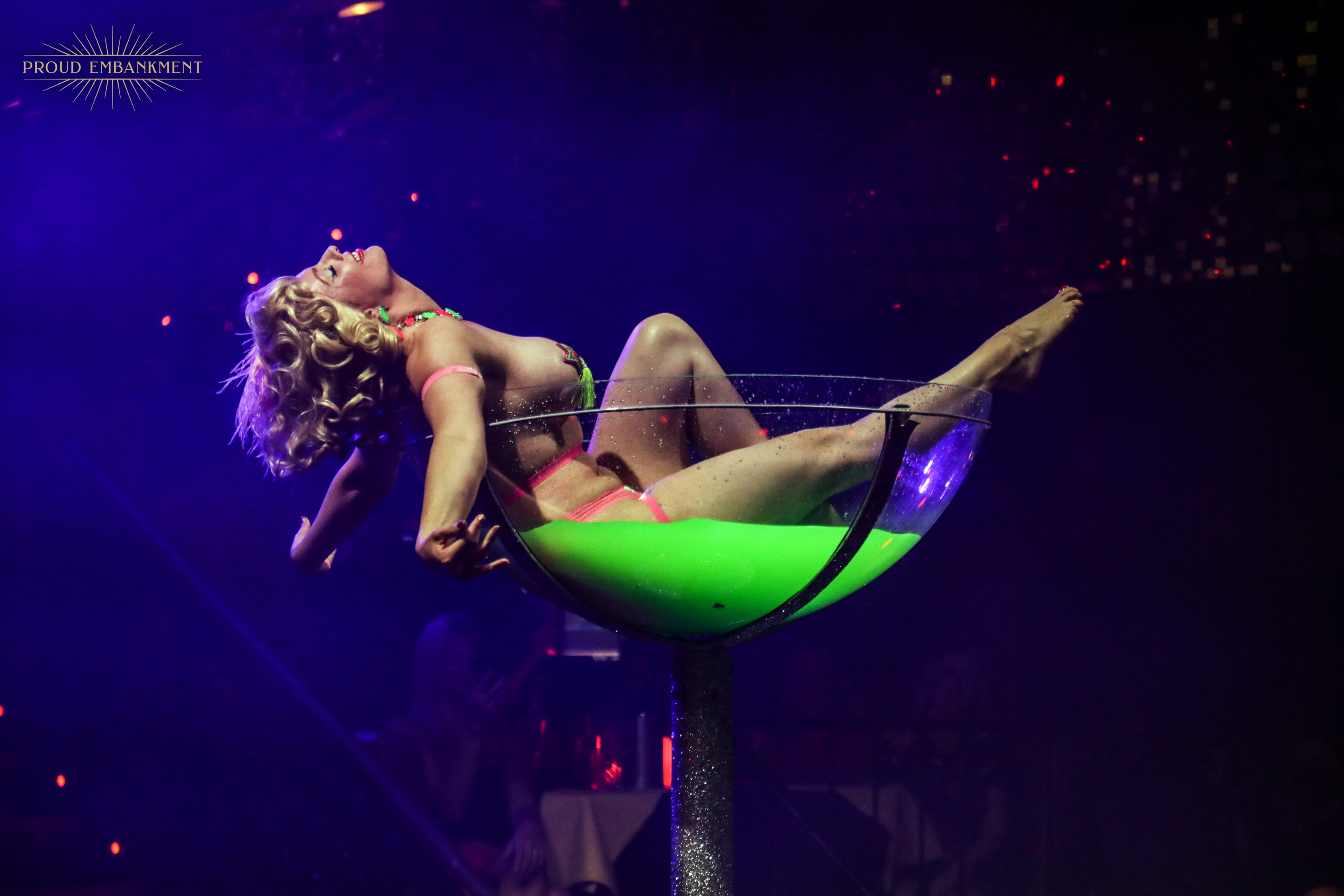 For starters, have you ever seen a bewitching rendition of "My Baby" with aerial artistry, fire-breathing and jaw-dropping acrobatics?

Or an elite music setlist mixing the classic Dirty Dancing tracks and hit songs from the 1980's? Or set and costume design so flamboyant you'll struggle to keep your jaw from dropping to the floor? What about dancing so sensual it makes the original film version of Dirty Dancing look plain vanilla? 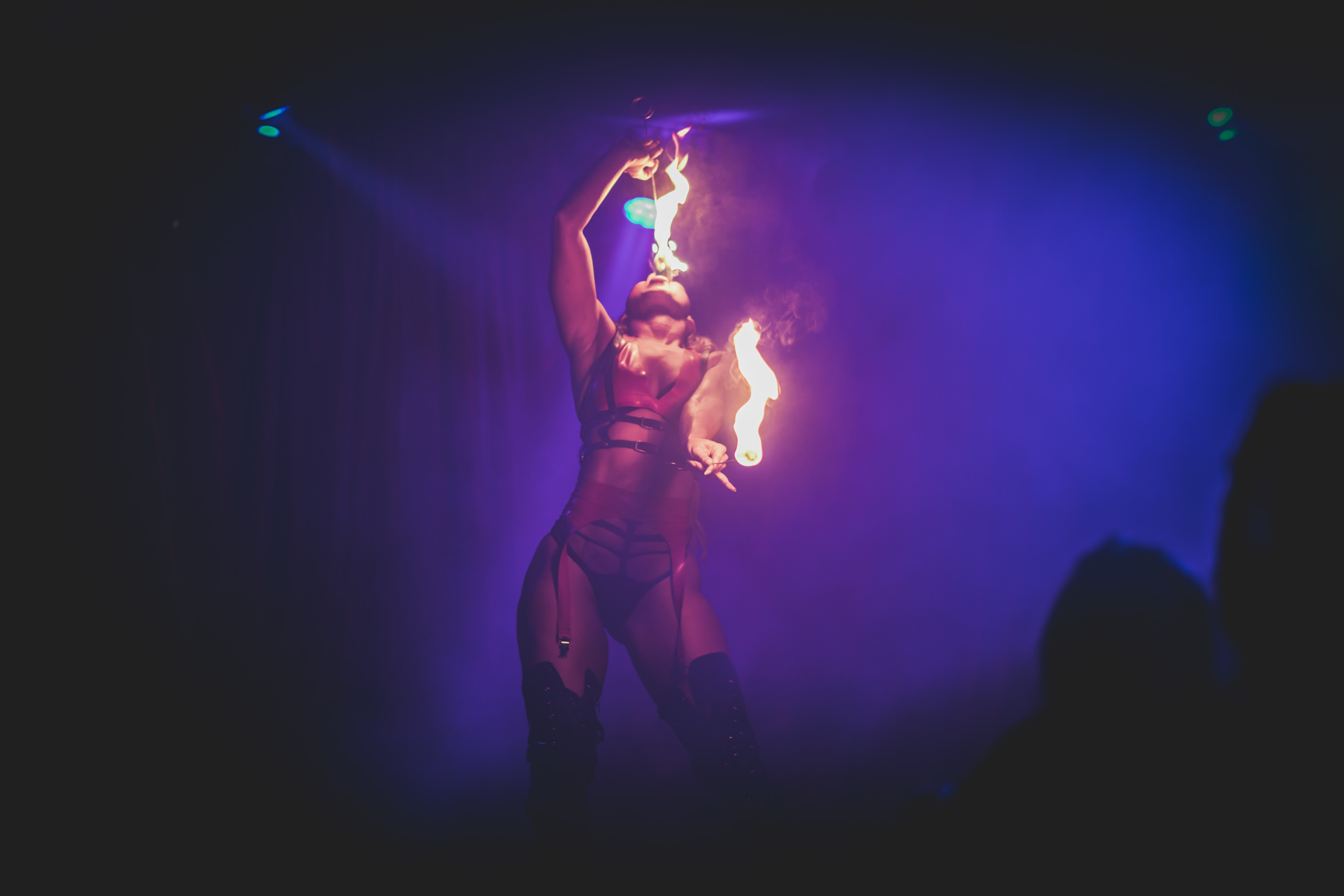 We didn't think so. We've selected the best circus and burlesque artistes from all over the world and created a cabaret dream team that other cabaret clubs couldn't compare to even if they tried. Move over, cabaret at the Kit Kat! 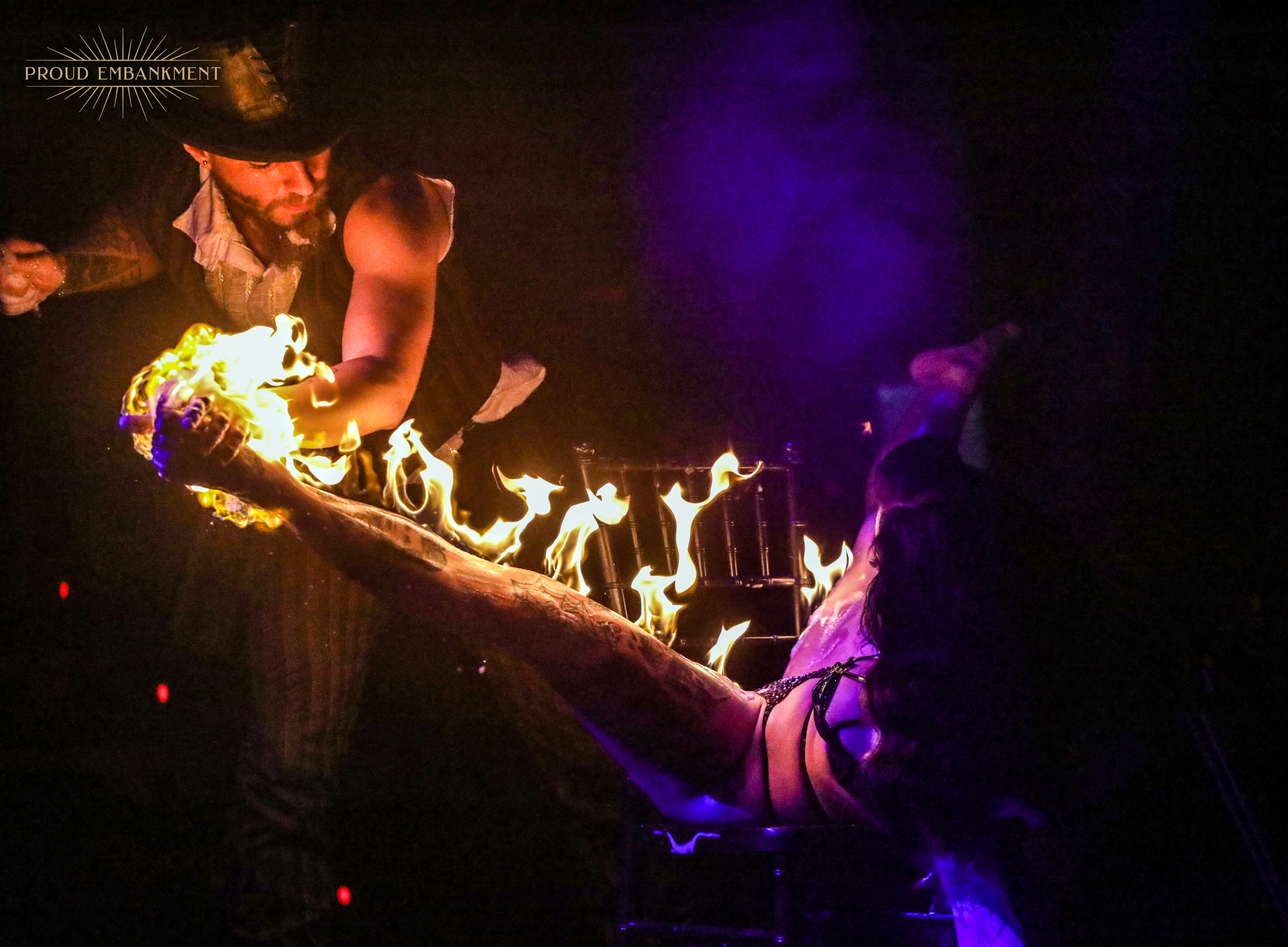 And how could we forget about Embankment's naughty little sister, Proud City?

Proud City opened in 2009 after the sheer popularity of Proud Embankment got almost too much for even us to contain. The people of London needed more Proud Cabaret, and who are we to deny the people what they want? And thus, Proud City was born. And it's been making noise in the London nightlife scene ever since.

An intimate, low-ceilinged, dark and opulent space, our Proud City pays homage to the prohibition days by being decorated in the style of a 1920's speakeasy. See what we mean when we say we know how to set a scene? 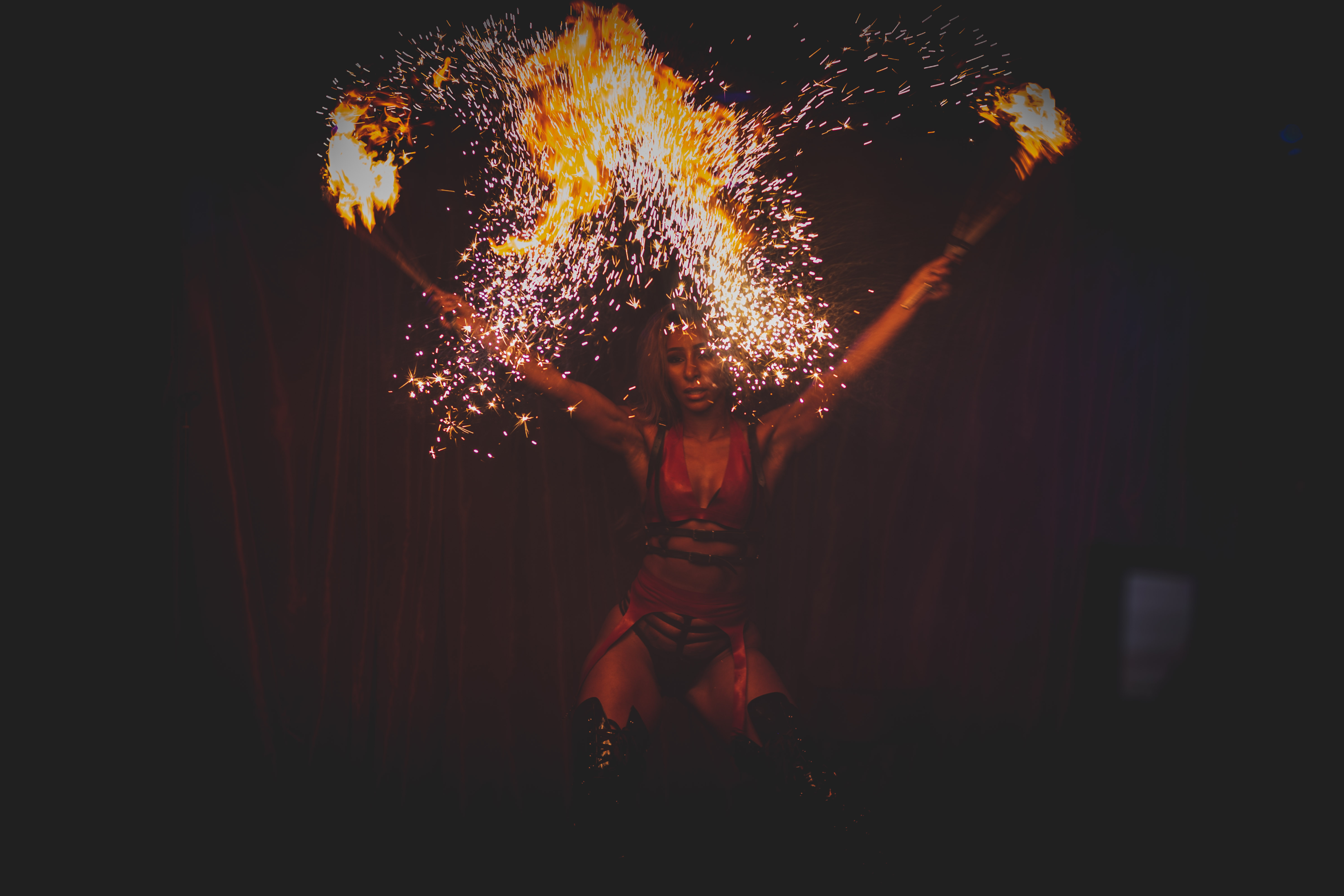 Just like our flagship Embankment venue, Proud City is famed around these parts

We throw naughty, flaunty and mightily entertaining shows that drop jaws, induce "wows" and get you up and dancing before you can say "cabaret".This cosy venue is a great joint for a date, a hen-do, stag night, work party, or any other special occasion you like. Scratch that. Do you even need a special occasion to warrant a night at Proud Cabaret? The short answer? Absolutely not! 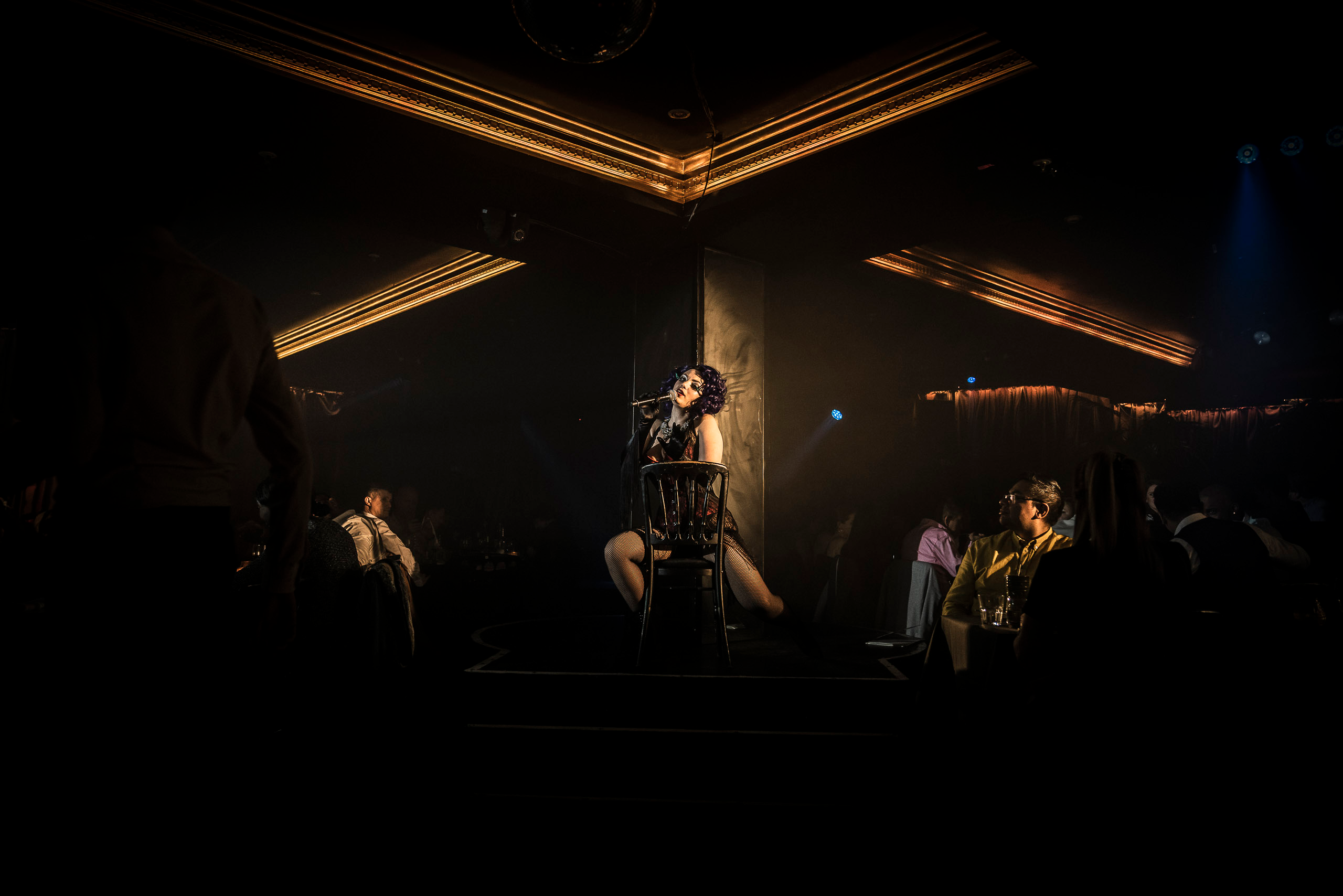 Experience cabaret in its highest quality at Proud City - where the music's pumping, the drinks are free-flowing, the performances are wowing, the audience are cackling, and the jaws are dropping. Take our Drag Bingo show, for example. Who said bingo was just for the golden oldies? Not us! 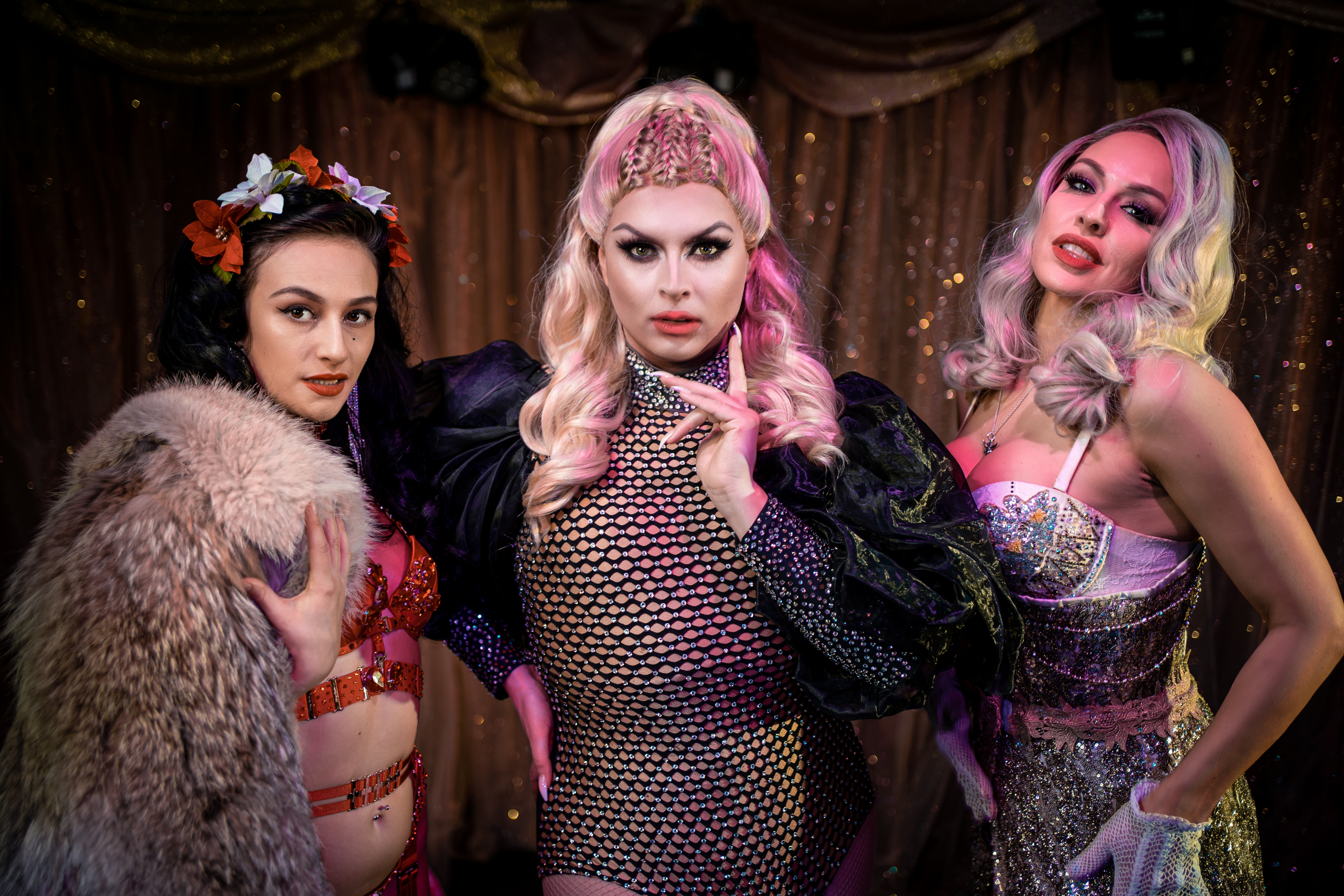 Throw in some free-flowing cocktails, head-banging tunes, stomach-aching banter and you've got yourself an hilarious afternoon so funny, you'll be laughing the whole train ride home. We at Proud Group are known for pushing the envelope when it comes to putting on a show, and Drag Bingo is no different.

Watch the UK's best Drag Queens come together in our fabulous cast and serve some scandalous hilarity that's sassy with a capital "S".

If only old Mama Ru Paul could see how amazingly sassy our show is, she'd be wiping away tears of laughter. Make sure to stretch and warm up your vocal chords, because you'll be singing and dancing until London bridge falls down. The only thing we ask of you? You better dress to impress, because if you're not dressed to slay - our Queens will make you sashay away. 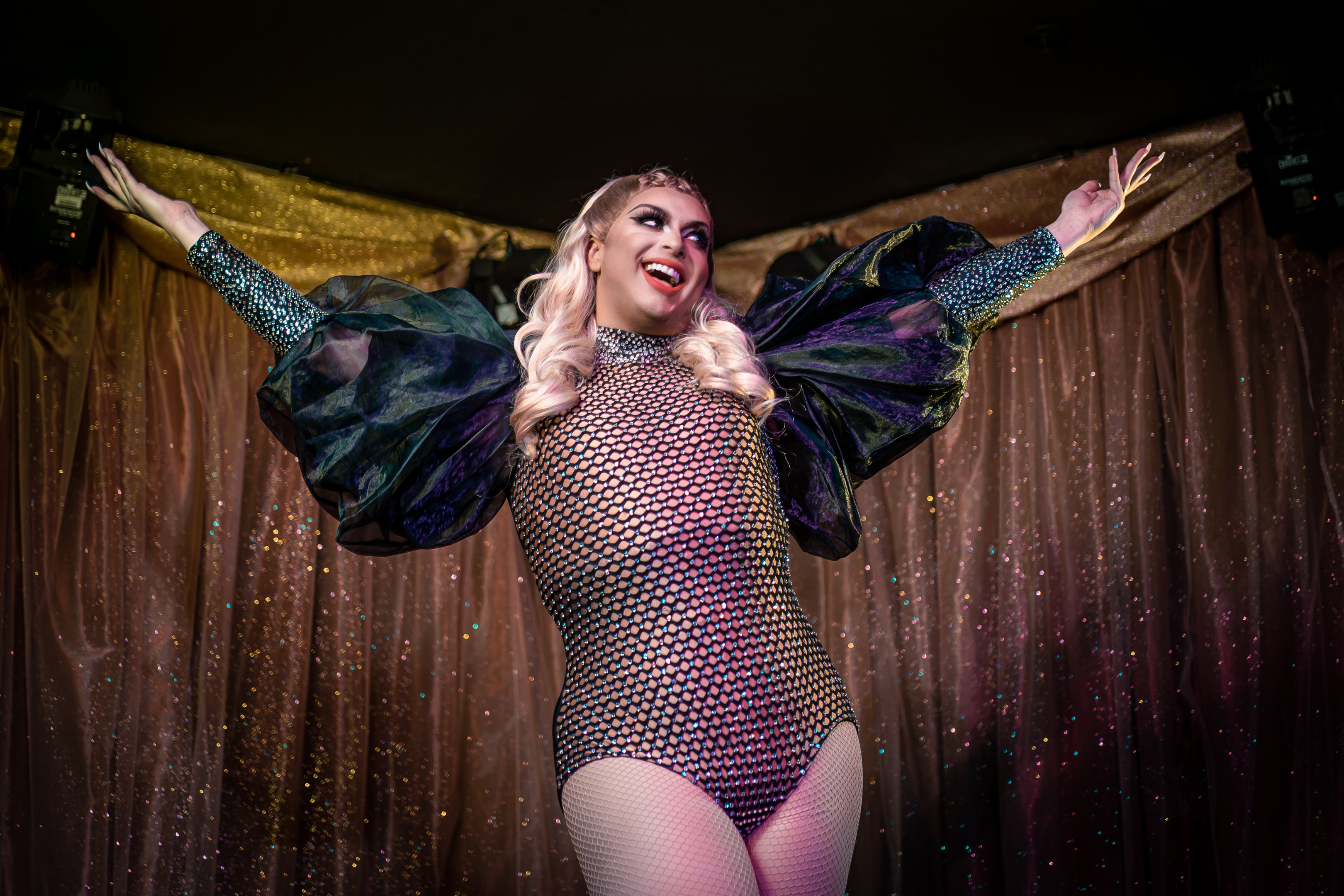 Now we've reached the end of this blog, you should be in-the-know about where to buy your cabaret tickets in London. And we've made it abundantly clear - when it concerns cabarets in London - it's Proud or bust.

Life is a cabaret, old chum. And no-one cabarets like Proud Group. We'll meet you at the next show.